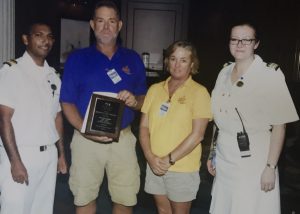 Princess Cruise Lines names Anthony’s Key Resort’s Dolphin Encounter as the 2010-2011 C.R.U.I.S.E Tour of the Season for the port of Roatan. The award ceremony for exemplary service in hospitality, took place aboard the Crown Princess while docked at Mahogany Bay, Roatan for the last time this season on Tuesday, April 17th, 2012.

It was a small intimate occasion during which the Captain and senior crew of the Crown Princess assembled in one of the ship’s lounges to meet and mingle with Eldon Bolton, Teri Bolton, Samir Galindo and Joni Galindo who were present to receive the award. They praised Anthony’s Key Resort for its exemplary service to both the guests and crew of the ship and the Dolphin Encounter tour for providing passengers with a positive and memorable experience that effectively showcased the destination of Roatan. Following the ceremony, a tour of the ship was given and then served lunch onboard.

At the conclusion of the day’s events, both the ship’s officers, the Galindos and the Boltons reaffirmed their commitment — giving Roatan visitors excellent service. They parted with anticipation of more good things to come next season in which the Crown Princess will be calling to Roatan on a weekly basis out of Galveston, Texas.

History and Nature of the C.R.U.I.S.E. Award

The C.R.U.I.S.E. (Courtesy, Respect, Unfailing in Service and Excellence) program is the longest running customer service program in the cruise industry. Awards are given to the tours that receive consistently high ratings, positive passenger comments and noted as an excellent value.

One of the best-known names in cruising, Princess Cruises first set sail in 1965 with a single ship cruising to Mexico. Today, the line has grown to become the third largest cruise line in the world, renowned for innovative ships, an array of onboard options, and an environment of exceptional customer service. A recognized leader in worldwide cruising, Princess offers approximately 1.3 million passengers each year the opportunity to escape to the top destinations around the globe, aboard a fleet of 17 modern vessels.

Princess Cruises was catapulted to stardom in 1977 when one of its ships, Pacific Princess, was cast in a starring role on a new television show called “The Love Boat.” The weekly series, which introduced millions of viewers to the concept of a sea-going vacation, was an instant hit and both the company name and its “seawitch” logo have remained synonymous with cruising ever since. The show, which can still be seen around the world, has been widely credited with fueling the dramatic expansion of the industry.