Temperatures on Roatan hover between 77 and 88 ° F. The rainy period occurs between October and January. Rainfall exceeds 6 ft or 2,000 mm annually most of which falls during the rainy season. While the length of the dry season can vary, the average length of this period is three months. Less than 100 mm of precipitation occurs from February through June with the period of dry soil occurring from March through May. The warm crystal clear waters surrounding Roatán range from 78 to 84 ° F.

The Bay Islands lie in the trade wind belt and east to southeast trade winds with 19 to 26 mph velocities are relatively constant. Periods of up to five days of dead calm are common in August, and each winter five to seven North American cold fronts (“northers”) reach the islands bringing wind shifts to the north and west, overcast skies and prolonged rainfall. On the northern coast of the islands, winds typically blow from the east. The almost continuous influence of trade winds results in a characteristic condition of high relative humidity. While Roatán lies further west than the paths of most Atlantic hurricanes, one large one is estimated every ten years. Before Hurricane Mitch in 1998, Hurricane Fifi in 1974 was the worst in recent times: wind speeds reached over 100 miles per hour, and over 20 inches of rain fell.

Roatan has a mountainous backbone; only 2% is considered level (less < 5% grade). It’s many steep peaks, some rising as high as 1,300 feet, make the island poorly suited for agriculture. While the majority of the island possesses slopes between 30 and 75%, they can attain slopes of 90% in some areas. Most level areas are swampy.

The island vegetation has been modified over the years as agriculture and exotic species have been introduced (cashews, mangos, almonds). Despite the alteration, the warm, moist climate still supports a lush diversity of plant life. Over 50% of the island is under some type of forest cover. Several vegetative types prevail. Primary, secondary, mixed, and pine forests are found on the higher ridges. Located on the lower valley slopes are small rainforests like growths of tall hardwoods, dense palms, lianas, orchids, and ferns. A thorn-scrub association is somewhat widespread in Roatan. There are also several areas of concentrated mangrove cover and beach vegetation around the island. The native pines and oaks that impressed Columbus into naming the Bay Islands after them, although they still exist they no longer cover such an extensive area. Other native species include the gumbo-limbo, cecropia, strangler fig and many different palms. The trunks and branches of each tree are home to a variety of orchids, lianas, fern, and bromeliads. Drier sites are home to acacia and mimosa with their sharp thorns.

The terrestrial ecosystems on Roatan support an abundance of wildlife. While many species found here are the same animals on the mainland, the isolation of the Bay Islands has provided an opportunity for some endemic species to evolve. There are presently nine species and two sub-species of animals endemic to the Bay Islands. Some of these species are the Roatan Parrot (Amazona xantholora), the Roatán Agouti (Dasyprocta ruatanica), the Roatán Coral Snake (Micrurus ruatanica), the Marmosa (Marmosa ruatanica) (mouse opossum), and the Rosy Boa (Boa constrictor). Five of the species are mollusks described by Professor Emilio Garcia of Louisiana State University in cooperation with RIMS. Wildlife that is extinct or extirpated from the Bay Islands includes the Caribbean Monk Seal (now extinct), the West Indian Manatee, and the Brown and Red-Footed Boobies.

The Bay Islands Department (political sub-division), created in 1872, is Honduras’ most northern and completely insular department. In the 1992 national census, it was suggested that the population of the Bay Islands was upwards of 30,000 people with the majority, about 66.2 %, living on Roatán. A recent census suggests the population has grown to 100,000. The major population centers in Roatán are Coxen Hole, French Harbor, and Oak Ridge. Smaller towns include West End, Sandy Bay, and Punta Gorda. Most people on the island are bilingual (Spanish and English) coming from a cultural heritage of English descent, African Caribbean, Indian, and Central and North Americans. You will also hear dialects of Garifuna and Creole. Roatan is the only Bay Island with an extensive road and communication system. The number of tourists that visit the Bay Islands annually now exceeds the population. This tourism is based principally on scuba diving. In 1969 about 900 tourists visited these islands for diving related recreation. That number increased to 8,000 in 1988 and doubled to 17,000 by 1992. With the expansion of the airport runway in 1990 and the completion of the first cruise ship terminal in 2000 that number has increased substantially and according to recent estimates, the number of tourists now exceed 250,000 per year.

When the Government of Honduras declared the Bay Islands a “tourist zone” on March 30, 1982, major regulatory authority for conserving the Bay Islands was transferred to the Honduran Ministry of Culture and Tourism. Growing concern over the critical balance between environmental health and economic prosperity in the Bay Islands has led to the development of several plans, which address both conservation and initiatives to increase tourism. Efforts include several studies of the Bay Island’s marine ecosystems, studies on watershed management and forest protection and work currently underway at RIMS. The Bay Islands’ most important conservation efforts are still in production; a governmental initiative to develop an environmental management plan to help achieve sustainable development and prevent the deterioration of the natural resources of the Bay Islands. 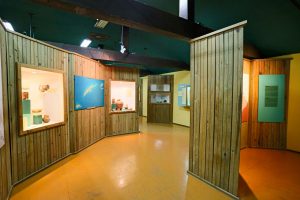 In 1992, Cheryl Galindo, wife of resort owner Julio Galindo, created the Roatan Museum. The museum is housed in the RIMS facility and created with the guidance and expertise of the Honduran Institute of Anthropology. Through artifacts, murals, maps, and documents, the museum reflects the culture and history of the Bay Islands.

Honduras is a small peaceful Central American country bordered by Guatemala, El Salvador, and Nicaragua. Honduras, the second largest country in Central America, is almost 112,000 square kilometers (roughly the size of Tennessee) of mountains and coastal plains. Dozens of rivers cascade down from the mountains to its wide Caribbean coast and narrow Pacific plain.

Honduras’ Bay Islands, including Roatan, lie off its Caribbean coast and are the focal point of Honduras’ growing tourism industry. Here divers and snorkelers indulge in the splendor of the hemisphere’s longest barrier reef system.

With beautiful beaches, crystalline waters, untouched natural wonders and cultural encounters with ancient and colonial worlds, Honduras and the Bay Islands will satisfy the most active and adventurous travelers.

Pre-Columbian Honduras was home to at least six known groups, including the advanced Maya, the Lenca, and the Miskitos. The Maya were dominant on the mainland of Honduras, where their ruins can still be found. Honduras’ history changed when Columbus explored the area in 1502. While the Spanish settled the region, both the Spanish and the English fought for dominance in the region for several centuries. In 1821 Honduras, Mexico and three other Central American nations declared its independence from Spain. In 1838, Honduras left this federation and became independent.

The capital of Honduras is Tegucigalpa, located in the southwestern part of the country. Its population is roughly 8 million people and the official language is Spanish but many Amerindian dialects are also spoken, along with English in the Bay Islands.